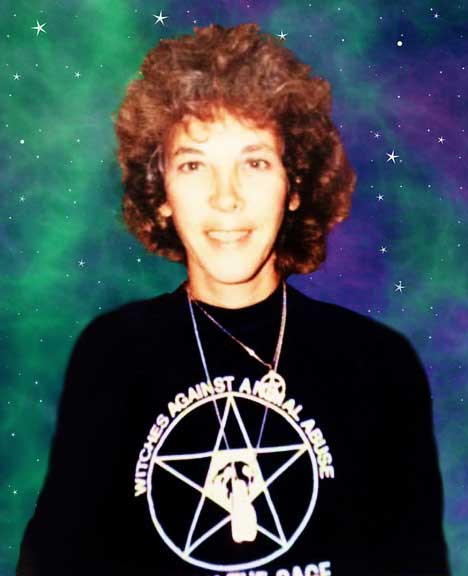 Carol Bulzone is a legend in the NYC Wiccan community; as the co-founder of Enchantments in the East Village and High Priestess and Witch Queen since 1975, Bulzone has influenced a generation of young NYC witches.

Bulzone, whose magickal name is Lady Miw Sekhmet, comes from a long line of goddess worshippers.  Her grandmother used to lead the procession of the Black Madonna in Naples, Italy, where her family is originally from.

Bulzone, who was born in Brooklyn and grew up in Queens, says that she always considered herself a witch. It was a time when witchcraft was very much underground and to get initiated was often a daunting task that sometimes took years.

“I got my first Ouija board with I was 13,” she says. “I was always dedicated to the mother goddess and was fascinated by witchcraft – from a young age I knew I wanted to own an occult store.”

She says that in the late there was no pagan community in NYC and only a few books on the subject.  She began making weekly trips to the logical place to find witches – Salem, Massachusetts.

Her journey led her to Laurie Cabot’s store located on Derby Street near the Salem waterfront. “When I found her store, it was closed, but I could see her inside, staring at a candle flame,” she says. It started a friendship and mentorship that lasted years; however, it did not lead to the initiation that Bulzone sought.

Bulzone says that she helped Cabot run the Witches Ball for several years and also was about to open an occult store with her near the historic Hawthorne Hotel; however, the deal with the storefront fell through at the last minute, leaving her frustrated.

Bulzone says that her journey led her back to NYC – to the Warlock Shop in Brooklyn Heights. However, she was again blocked from joining its Pagan Way study group.

“The group was open only to male and female couples – gay people could not join,” she says. “This was all the more ironic because Herman Slater and Eddie Buczynski (co-owners) were both gay.”

Finally, Slater introduced Bulzone to Lady Rhea, a meeting that would change the course of both their lives. She and Rhea were handfasted in 1975. Their marriage lasted nine years and a friendship and family that has lasted 45 years and counting.

“When I went to meet her, I was expecting an older woman with white hair, instead Rhea opened the door and had long, dark hair and was wearing a red bodysuit,” she says.

Bulzone and Rhea both ended up working for Slater at the Magickal Childe in Manhattan and shared their spiritual journey together.

Rhea eventually initiated her into the Kentucky Line of Gardnerian Witchcraft.  Then she, Lady Rhea, and Buczynski worked together to form the Minoan Tradition, a witchcraft path for gay witches.  The Minoan tradition has become international. There are now Wiccan/Minoan chapters in England, Italy, France, Sweden, Brazil and Scotland, among other places.

“The whole idea of people getting shut out of initiations because of their sexual preference is wrong,” she says. “Spirits have no sex. This is a spiritual religion.”

She notes that most male witches who she knows are gay or bisexual and believes that this is because they have the ability to integrate the Goddess energy with their own male energy.

“In many cultures, including Native American culture, gay people were seen as gifted,” she says. “We were the specially chosen children of the Goddess.  We understood the balance within.”

Over the years, she never gave up on her dream to open an occult store.  And when Slater announced that he was retiring and selling the Magickal Childe, she and Rhea jumped at the opportunity to buy it.  Slater’s plan was to retire to upstate New York and retain the mail order part of the company and Rhea and Bulzone would own the store in Greenwich Village. However, again, at the last minute, the deal fell through after Slater changed his mind about retirement.

All this time, Bulzone would drive from her home in Queens to the Childe and always drive crosstown on East ninth Street.  She was drawn to the street and one day she saw a storefront for rent at 341 East Ninth Street, which she and Rhea jumped on.

Bulzone recalls the storefront was in terrible condition. There were also 66 stray cats living in the store and being fed by a tenant – which she took as a good omen, since one of her patron Goddesses, Sekhmet, takes the form of a cat (Bastet) when She is calm.

“It literally took blood sweat and tears to build Enchantments,” she says.  “Most of the work we did ourselves, tearing open walls, rebuilding the bathroom, putting shelves up – and making the store beautiful.”

It wasn’t before long that the magic began happening. Many credit Enchantments with the positive transformation of East Ninth Street, now one of the trendiest streets in the city. The store also began getting mainstream media attention, including a Halloween special on MTV. It was at that moment that Bulzone realized that her dream had come true.

“MTV came to the store and filmed a ritual around the fire in the back yard and then took a gorgeous video of the store – it was the most beautiful witchcraft store you could wish for,” she says.

Bulzone eventually sold the store and moved upstate, where she still runs a circle with one of her students, Matthew Sawicki (who is also a reader on this site).

For years she read tarot and now has “come out of retirement” to read again and guide the esoteric community.  After 40 years of reading, she still gets contacted by clients who say that she changed their lives through her readings and advice.

“We are here to give people hope and act as a counterbalance to the evil in the world,” she says. “We bring light to the world, as a balance. God is energy – a balance of female and male.  The witch is that balance.”