The activist Witches are at it again.
Russian President Vladimir Putin has replaced former US President Donald Trump as the personification of evil for leftist, “woke” Witches.
Serial hexer Michael Hughes, author of Magic for the Resistance: Rituals and Spells for Change, has been organizing a weekly “global mass ritual to curse Vladimir Putin and protect the people of Ukraine.” The virtual rituals are held every Saturday globally. 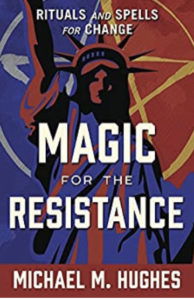 Hughes has been using witchcraft as a tool for political activism for a number of years, since his ritual “A spell to bind Donald Trump and those who abet him” went viral in 2017.
Catland Books in Brooklyn has been groundbreaking in their witch activism. They first held a public hexing ritual against then-newly appointed Supreme Court Justice Brett Kavanaugh in 2018, both because of Kavanaugh’s political views and the allegations that Kavanaugh committed a sexual assault.
The Putin hex, however, is a tall order, since the goal is not only to depose Putin – but also to end a war.
Ukrainian witches are also active in the magick wars and, on March 31, gathered at the sacred Bald mountain, just outside Kiev, and performed a “ritual against the enemy of the Ukrainian people – Vladimir Putin.” The followed up this with rituals in unspecified Slavic countries against Putin and the Russian forces.
The Russian government is now claiming that the Ukrainian military is using “black magic” against Russian troops, based on magickal sigils that Ukrainian troops had painted on the walls of military bases that they had abandoned.
According to an early May Newsweek article: “ Ukrainian “authorities do not mind flirting with evil forces,” Russian pro-Kremlin news website life.ru claimed in an article titled: Abductions, robbery, extortion: How the Nazis hunted the Moscow Patriarchate in Ukraine.”
The article accused Oleksiy Arestovych, military adviser to Ukraine’s presidency, of calling on Ukrainian witches and sorcerers to conduct occult rites after Putin launched his invasion in February. 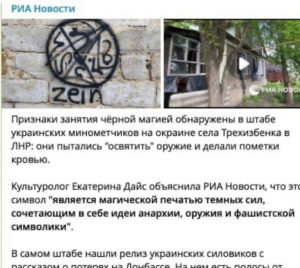 However, Putin appears to have his own magickal protection. Aljona Polin, Russia’s leading witch, founder of the ‘Great Witches of Russia’ association, held a general council of witches in support of Putin on the evening of 12 March, according to Asia News. The protective ritual featured a portrait of Putin in the middle of the circle, next to a lit candle. Hundreds of witches came from all over Russia to attend the event.
In 2019, the same witches, led by Polin, conducted a public “cone of power”ritual in order to transfer “mystical energy to Putin.” Polin, in a news interview, said that the purpose of the ritual was to “enhance the quality of life in Russian, the world in general and to support the President (Putin).”
In Russian, witchcraft, folk magic and individuals claiming mystical powers have been a strong part of the popular Russian culture; as of 2017, there were approximately 800,000 people making their living as folk healers, psychics, mediums and other occult services.

Russia additionally has a strong protective egregore in the form of the Russian Orthodox Church, whose apostolic lineage claims magical and spiritual power.
After the fall of communism, Russia has become one of the most staunchly Christian countries in the world.
Putin has the strong backing of US conservative evangelicals, who see the Russians as fellow travelers in the fight against what they perceive to be western liberal decadence. They see Putin’s Russia as the last bastion of Western Christianity.
Putin has the strong backing of Russian Orthodox Patriarch Kirill and has publicly taken numerous photos
Putins is backed by the Orthodox Church, a powerful organization politically and spiritually. Like the Catholic Church, the Russian Orthodox Church has its own egregore and can be seen as a magical organization.  Russian Orthodox priests have been ritually blessing bombs and missiles being used in the Ukraine military action, including one ironically called “Satan.” 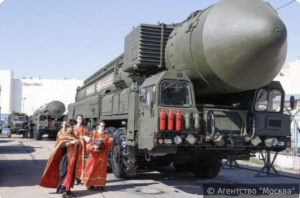 Putin has also has a secret weapon – the Chechens. The Chechens are some of the best fighters in the world and are members of a secretive Naqshabandi Sufi order.
Some scholars believe that the Sufis were the original inspiration of the “witch” in Europe.
The Knights Templar brought much of the esoteric wisdom from Islam back to Europe during the Middle Ages and were executed by the Catholic Church for it. There is a theory that the deity “Baphomet” – made famous by Elias Levi – is actually a garble of Mahomet, or Mohammed the prophet of Islam, who is venerated among all Muslims.
In Chechnya, there is no separation between Church and State. Sufi rituals and sacrifices are held in government offices and Chechen leader Ramadan Khadryov is high-ranking Sufi Shaykh.
The Chechen have said that their powerful “Zhikr,” in which they circumambulate widdershins around their ritual space while reciting their Islamic mantra, has given them the power to defeat their enemies in battle.

So the Western witches of TikTok really have their work cut out for them. They are cursing and hexing a man and country who has several ancient lineages and egregores of power .
So, if I were a betting man, I would put my money on the East, with its unbroken chain of practice and lineage. Gone are the days of British witches raising a cone of power to protect England from Germany air raids.
Many of the Western witches involved in hexing are solitary practitioners and may not have an active link to an actual magickal lineage.
There is also a big difference between protective magic and cursing. Those involved in cursing individuals who have done nothing personally to them are opening themselves us to mental and physical problems.
The negative energy can bounce back. Some of these well-intentioned witches may suffer health problems for the rest of their lives.
There is clearly a magick war afoot in Europe. As in all historical moments, there are occult forces at work in the background. May the justified win.

This website uses non-invasive cookies to ensure you get the best experience on our website.Ok (or scroll)Learn More