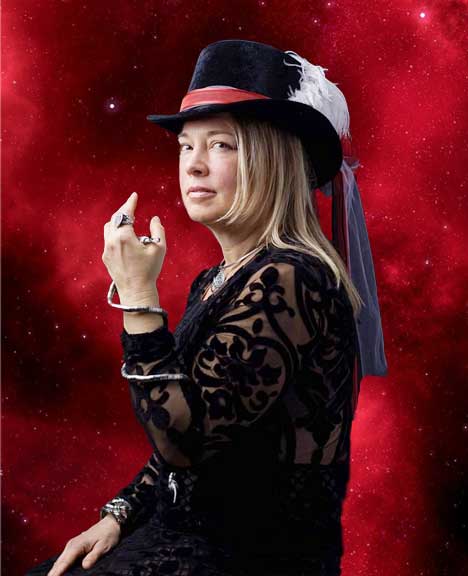 For Hecatean High Priestess Laurie Bizzarro, the universe is always communicating with us – through our dreams.

“People’s dreams are the true portals of their fears and desires,” she says.  “Our spirits use dreams to inform us of what path we should take to our higher purpose and integrate the things that we may be missing in our conscious life.”

Bizzarro is probably best known as the high priestess and founder of the NYC-based Temple of Hecate and acting High Priestess of the New York Coven of Witches; however, she also has a master’s in clinical psychology. She is trained in a number of different modalities, including the Rorschach test, in which subjects’ perceptions of inkblots are analyzed using psychological interpretation.

“Even if someone doesn’t remember their dreams, I can still work with them through parceling out word associations and through intuition,” says Bizzarro, who also uses Tarot cards during her sessions. “The subconscious spirit communicates in many ways all around us.”

Bizzarro says that she has been extremely empathic since her childhood, growing up in nearby New Jersey.

“I had a very rough childhood, I was alone a lot,” she says. “I was always drawn to nature and darkness. As a child I would escape into the woods at night – I always felt something was beckoning me.”

Bizzarro would later realize that it was the Goddess Hecate who was calling her.  She believes that she encountered a physical manifestation of the Goddess as a crone in 2000.  She ended up establishing the Temple of Hecate on July 28, 2014.

“I have been a daughter of Hecate for 20 years, since becoming involved in Craft,” she says. “I feel that she is my mother and calls to me – she is the queen of witches.  I have always been drawn to the underworld and to things not explainable and I feel that Hecate is the goddess of all realms, but especially that one.”

Bizzarro says that she also does life coaching sessions.  Her specialty is bringing her clients into clarity, by revealing things hidden to them in their conscious state.

“If you consistently ignore messages from your spirit guides and ancestors, you will not grow and not find your true path,” she says. “I have lived many lifetimes in my 49 years – it has been a wild ride.  My philosophy is not to force people to change, but to put them in touch with their inner wisdom and power – a voice of someone who has also been through this.”