There is a Chinese proverb: With time and patience, the Mulberry leaf becomes a silk gown.
This is true on so many levels in Kissena Park in Flushing, Queens, NY
Every June the berries on the many White Mulberry trees in the park ripen; hundreds of local residents bring bags, ladders to collect the nutritious berries. 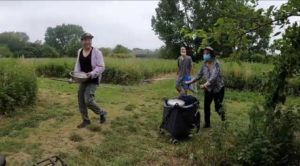 The tree speaks to the Chinese diaspora through many different levels, as a food, as a medicine and as a spiritual symbol.
Mulberry fruit is tasty, but also medicinal. In Traditional Chinese Medicine (TCM) it nourished the yin and blood and can be used for deficiency symptoms, including tinnitus, dizziness and insomnia. It strengthens the veins and arteries, is rich in anti-oxidants and is anti-inflammatory. It also lowers blood sugar and is good for diabetes.
The leaves are also medicinal and a “cooling” herb. A tea or tincture of the leaves is good for “hot” coughs. And like the berries, the leaves are good for blood sugar issues. The leaf extract inhibits a carbohydrate-digesting enzyme and significantly reduces the elevation of blood sugar.
The bark is likewise used medicinally in TCM. When stir-fried with honey, the bark is useful for hot and dry asthma.
For asthma, use the bark with Khella, Anemarrhena/Zhi Mu, Lobelia and Licorice. In animal studies, Mulberry bark strongly inhibited inflammatory cytokines, airway hyper-responsiveness and had anti-asthmatic activity. The root bark can also be used to treat hot sinus congestion (sinus infections or allergies with heat signs) along with Chrysanthemum/Ju Hua, Eyebright and Kudzu.
The White Mulberry is native to China and played an important role in Chinese culture, since best best silk comes from silkworms who feast on the Mulberry leaves. The leaves have a slight, Jasmine scent and attract the worms.

Many of New York City’s White Mulberry trees can be traced to a large shipment imported to Flushing, Queens by the plantsman William Prince in 1774. He imported the trees from China in an effort to establish a silk industry in New York.

I had always assumed that the trees were planted by the Chinese diaspora; Flushing is home to the largest Chinese community in the world.
However, it turns out that the Mulberry trees predated that Chinese diaspora by hundreds of years. I hope I am not being too dramatic; however, perhaps it was the spirit of these trees that attracted the Chinese to the area.
June in Kissena Park is festive in a way, with families gathering around the trees to pick the berries. On a recent bike ride through the park (see my video) I spotted at least two shaman singing to the spirit of the trees.
The Chinese maintain their traditions in Flushing and revere the tree through Taoist and shamanic practices.

In some Chinese traditions, the hollow Mulberry tree is identified as the “K’ong Sang,” the World Tree. According to the White Rabbit Institute of Healing: “It (Mulberry) is considered hermaphrodite because the tree dates back prior to the separation of Yin and Yang (male and female) and represents the Tao, or all encompassing cosmic order.” The Mulberry is also sacred in Islam and “can be found in Islamic sanctuaries and Islamic pilgrimage routes.”
So the Chinese residents sing to the spirit of the tree in the early morning, before the park becomes too busy with bikers, hikers and people playing softball in the nearby fields.
The park takes on an other-worldly feeling during these early mornings. The energy from the chanting is palpable.

I have seen spiritual offerings left in the woods and also shaman drumming in the forest.
Kissena at times become a temporary autonomous zone, outside of space and time, with the White Mulberry once again taking center stage, as it did during the days of the Silk Road.