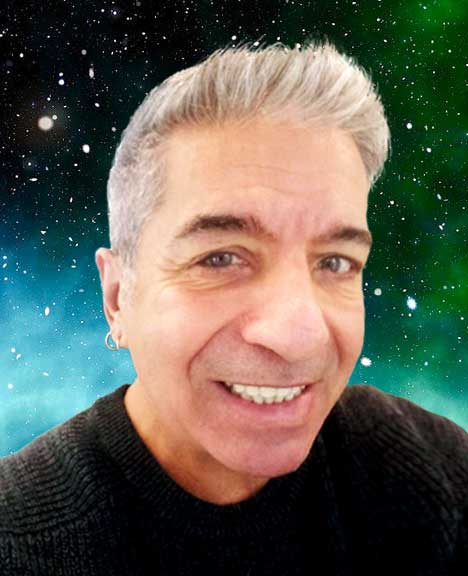 Anthony Russell embodies the romantic vision of a psychic from New York city –  sophisticated, well-traveled, articulate, and a master of several mystery traditions reflecting the melting pot of his locale.

A Manhattan native, Russel is well-known as a highly sought-after reader – and also as the owner of the former “Zodiac Lounge.”

In the movie “Bell, Book and Candle,” the fictional Zodiac Lounge was an underground hangout for NYC witches. Russell recreated this magical environment in his own lounge, which featured readers – and was a place for real NYC witches to gather after hours and talk shop. Russell closed the lounge in 2003; however, he has continued guiding his clients on their spiritual journey through his Tarot readings.

Russell discovered the Tarot when he was 9 years old.  He was on a visit to the Pierpont Morgan Museum and Library in NYC when he saw original Tarot cards on display from the only intact deck of the Visconti – Sforza tarot, which dates back to 1451.

“I was drawn to the cards from across the room,” he says. “I was fascinated by the colors and the composition – when I got closer to them, they almost appeared to be moving– they were very fluid to my vision.”

As fate would have it, Russell met a descendant of the Visconti family – the wife of one of his father’s business contacts – who agreed to teach him the deck. She agreed to teach him one card a month, with the agreement that he would write a report on each card.

“By the time I was 15, I had learned to interpret the entire deck,” he says. Russell says he often took his cards to Central Park and began reading for himself.  It wasn’t before long that he had a long list of clients that he would regularly read for in the park.

“Some of those clients still call for readings,” he says.  “And I also read for many of their children – and now, their grandchildren.”

Russell read Tarot as a way to support himself through his university degree and his post-graduate degree.  He then left the occult world to pursue a career in music.  He began by writing Pop and R&B, eventually transitioning into World Beat, where he was able to travel the world and learn the sacred music of many cultures and incorporate it into his work product, thus bringing sacred energy to the dance floors.

It wasn’t until he was in his 40s when a serious illness forced him to re-evaluate his life. During a near-death experience, he says that he had a vision that changed his life. Russell chose the road which brought him back to life, on the condition that he take care of “the very old, the very young and the very ill.”

As part of this agreement, Russell regularly raises money and awareness for abandoned children, senior citizens who find themselves isolated, and any who are living with a terminal illness.  He also returned to Tarot reading to guide souls on their journey.

After he closed the Zodiac Lounge, Russell focused on his readings and pursued an advanced degree in clinical psychology at age 61; not to open a practice – but to give better counsel in his readings.

Russell has been a natural medium since childhood; however, for many years, Russell refused to do straight-up mediumship sessions.  He says that many clients “were only interested in where the money was hidden, rather than resolving any issues with their loved ones.”

He has since softened his views – he says that he often gets “disincarnate beings” who join in on his psychic readings in order to give advice to his clients, often a relative. In this case, he will ask the client if they are comfortable with their deceased loved one joining the session and abide by their wishes.

“I liken my role to that of a multi-lingual bike messenger,” he says. “I have a document for you in a language few are fluent in.  It is my job to interpret it for you. My cards are my Rosetta Stone, and they’re always on the money.”